The Way of Saint Joseph

Let's Walk for the Children and the Church

We last left Fr. Miguel, Ignacio, and Eduardo having spent a long, very rainy day hiking from the border post of Peñas Blancas to La Cruz, Costa Rica. After a good night’s rest and a chance to dry out a bit, they were ready to set off again.

On the Camino de San José, every member of the team has a part to play. One of the things we have learned about Eduardo is that he loves food. He loves to eat, and to eat you have to cook. He enjoys that, too. He’ll even get up early to cook. On Wednesday morning, Eduardo fixed a delicious breakfast for the whole team to carry with them and eat on the road.

Many thanks to Father Yunner who hosted the team, and loaned them his kitchen, in his parish, La Santa Cruz in La Cruz, Costa Rica.

Fr. Miguel, Ignacio, and Eduardo were blessed to have spent two nights in the beautiful parish of La Santa Cruz.

The sun is coming up. When do they get to stop and eat that breakfast?

To the west of the Camino route lies Santa Rosa National Park. The park was created by government decree in 1971 to protect the scene of the Battle of Santa Rosa, a source of great pride in Costa Rica.

In June 1855, American lawyer William Walker, about whom I wrote in my post on Alajuela, arrived in Nicaragua with an army of mercenaries (known as “filibusters”) and the financial backing of some parties in the government of the United States. He set up his own government with plans to convert all of Central America into a slave state. When he sent his filibusters into Costa Rica, they were met by a force of about 9,000 Costa Rican civilians. On 20 March 1856, Walker’s army was routed in a 14 minute battle on a farm in the area that is now Santa Rosa National Park. An old hacienda building where some of Walker’s troops were housed, now known as La Casona (the Big House), today functions as the monument commemorating the heroes of the Battle of Santa Rosa and two other battles for Costa Rica’s independence that took place in the area in 1919 and 1955.

Santa Rosa National Park also has the mission of protecting the natural environment beyond the historical site. Some of the last remaining tropical dry forests in the world lie within the boundaries of the park. Before the area became a protected habitat, ranchers burned most of the region to create pasture for their cattle. Because of its protected status, the lands within the park are slowly returning to their natural state, especially closer to the coast, providing valuable habitat for many native species of flora and fauna.

About 115 mammal species, as well as over 250 bird species and more than 3800 insect species, are found within the park. In the dry season, when there is less vegetation to obscure the view, one might see peccaries, white-faced capuchin monkeys, or tamanduas.

If one is exceptionally lucky, a glimpse of one of the park’s cats, such as the margay or caucel, is a rare treat.

Just like humans, the wildlife, birds, and insects of Costa Rica need to be able to move from region to region during their seasonal migrations. Many of the species that live in the dry forests during the wet season move into the rainforests of the highlands during the dry season. In 1989 the Costa Rican government created Guanacaste National Park, adjacent to Santa Rosa National Park, to provide a migration corridor between these two habitats.

Guanacaste National Park protects the highland evergreen forests and the cloud forests found on the slopes of the Orosi and Cacao volcanoes, as well as the Caribbean rainforests of northern Costa Rica.

Wildlife in Guanacaste National Park is even more varied than in Santa Rosa National Park, with over 10,000 species of insects having been identified to date, along with at least 50 varieties of bats. This high density of biodiversity was one of the main factors that encouraged the Costa Rican government to protect the area.

The campaign to create a new park in northwestern Costa Rica began when international beef prices were low and local cattle ranchers were eager to sell their degraded grazing lands. Happily, the natural habitat in both parks is regenerating more quickly than biologists had anticipated.

Guanacaste National Park received its name because of the abundance of guanacaste trees that grow in the region. Guanacaste trees provided a major source of cattle feed for the ranches of the region before the establishment of the park. The foliage, fruit, and seeds are relished by all sorts of livestock, including cattle, pigs, goats, sheep, and horses.

The guanacaste tree is also commonly known as monkey-ear tree or elephant-ear tree due to the shape of its seed pods. Guanacaste trees are found throughout the tropical regions of the Americas, but are especially abundant along the Pacific coast of Costa Rica. Although some consider them invasive because of their powerful root systems, they are prized for their shade, a valuable relief from the intense sun of their Pacific coast habitat. They are the national tree of Costa Rica.

Guanacaste trees often grow up to one meter per year. Because of its rapid growth habit, and the water resistant quality of its wood, guanacaste is often used to make doors, windows, furniture, and cabinets, and is a favorite wood for shipbuilding. It is considered a relatively sustainable resource.

The beautiful seeds are commonly used in Costa Rica to make jewelry.

In 1989, in agreement with park authorities, 12,000 tons of compost from orange waste was dumped on the barren soil of the new park. The result has been a rejuvenation of much native plant life. Fr. Miguel took a few pictures of the rich variety of flowers the team encountered as they walked. 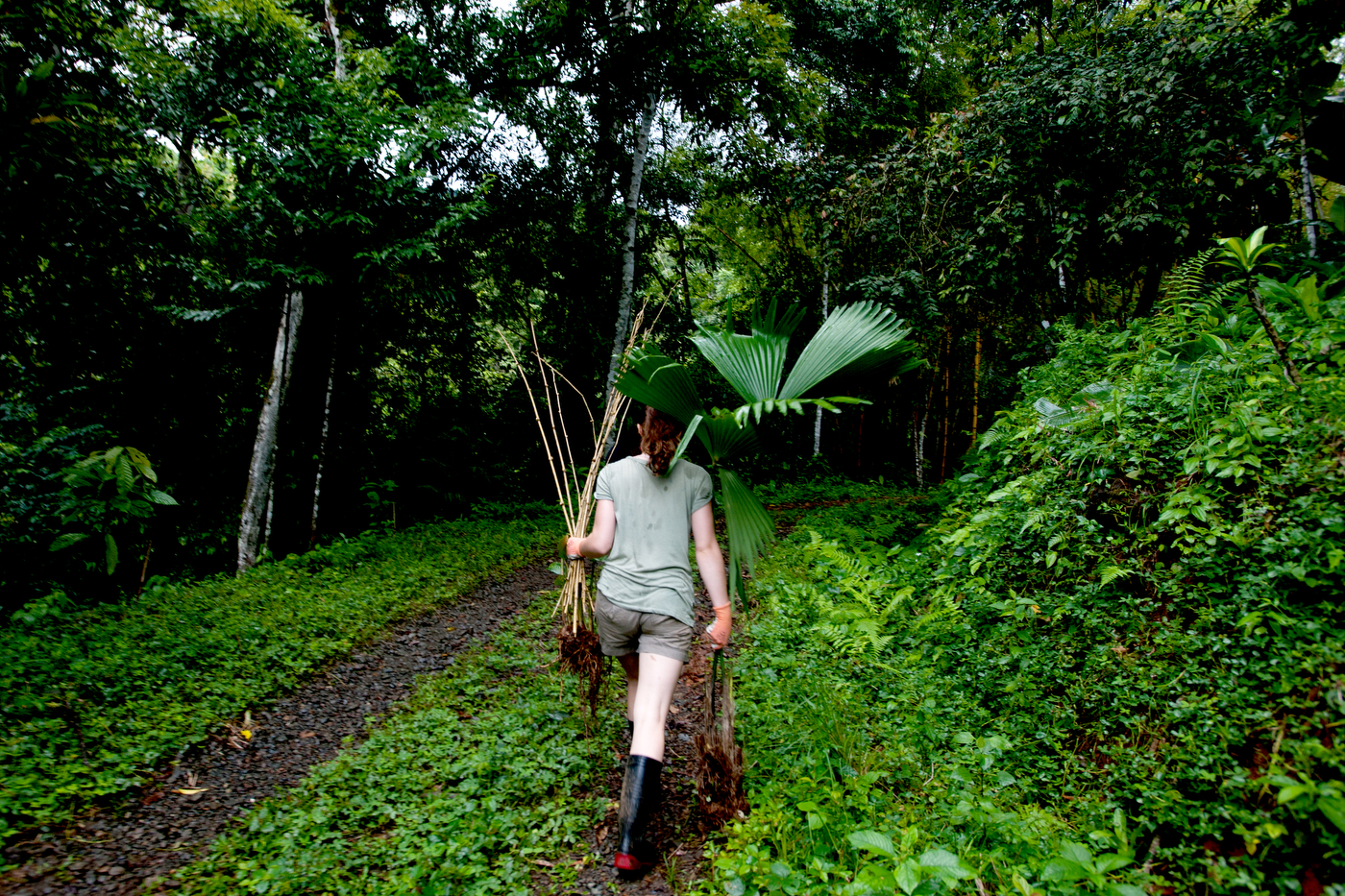 One of the goals of Costa Rica’s national park system is to encourage local participation in environmental programs and provide training and employment for the many ranch hands who were left without work when the local cattle ranches were sold to create the park. In 1999, these parks were together declared a World Heritage Site.

Although it was a privilege to see some of the beautiful land of the national parks, it made for a long day of walking.

The team had to cope with fatigue as the road through the parks seemed to go on and on.

By afternoon, according to Fr. Miguel, everyone was super cansados, or very tired. The side of the road may not be the best place for a coyotito, but almost any place will do in a pinch.

The team walked as far as Pelón de la Altura, a farm just outside the boundaries of the national parks on the Pan American Highway, and then got a ride into Liberia to spend the night. “Pelón de la Altura” means “Hair of the Heights” according to Google translate. Interesting name for a farm…

The dry season in this part of Costa Rica extends from December to April. The rainy season runs from May to November, and is interrupted by a two to three week dry spell known as Veranillo de San Juan or Saint John’s Little Summer. Unfortunately, the team is walking through Costa Rica during the wettest time of the year!

Everyone was a little too worn out to really enjoy the attractions of Liberia.

But it was hard to resist the special treat that Fr. Guillermo had waiting at the rectory of the Cathedral where the team would be staying for a couple of nights.

Thank you for following along this far! Check back for more updates from the Camino de San José…coming soon!